Today we want to congratulate the Dutch Network War Collections (in Dutch: Netwerk Oorlogsbronnen (NOB)) with the launch of oorlogslevens.nl (warlives.org): the starting point for finding Dutch victims of WWII.

Since the number of people who can talk from personal experience about the war is ever-dwindling, sources are becoming ever more important for bringing stories from the war to light. The NOB used Spinque Desk to match names found in over a million records from some 20 different collections using names, dates and places. Data relating to the same person were subsequently linked, resulting in the lives of over 300,000 eyewitnesses (only victims as yet) being reconstructed: prisoners held in concentration camps and prisons, victims of air raids, forced labourers, resistance fighters, soldiers and Jewish, Sinti and Roma victims. On oorlogslevens.nl you can search for these persons and view their lives in the form of timelines with personal data.

Spinque Desk is used to power the underlying API that finds the personal data that is presented on a timeline. The technical challenge in this project is the fact that person lives are reconstructed from records from various sources. This process of connecting records describing the same person, is described in so-called link-strategies in Spinque Desk. As all records come from handwritten original data, there are numerous errors in dates, names, locations, etc. The link-strategies attempt to overcome these small errors and to make the linking process repeatable. When participating sources update their data, oorlogslevens.nl will be updated too, with no or minimal manual effort.

I started a search on oorlogslevens.nl with 'camp Amersfoort' where I used to go to commemorate the dead on the 4th of May and got acquainted with Krijn Martinus Breur: 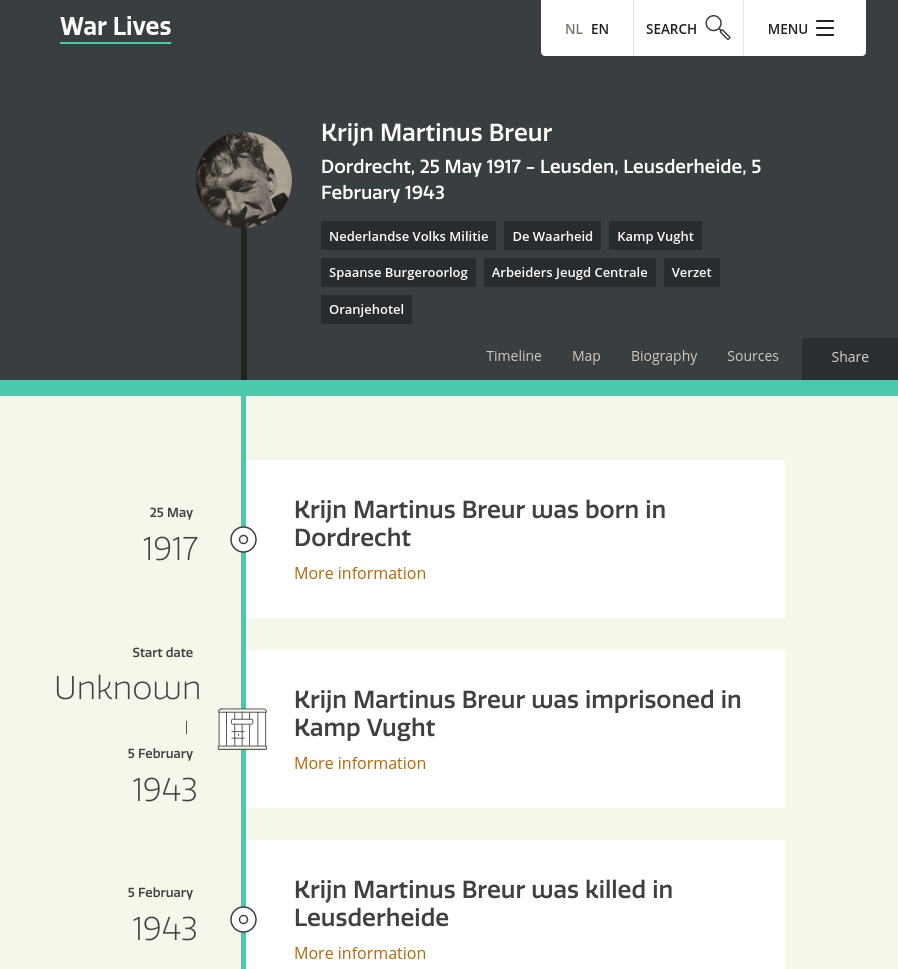 I noticed the term 'Spanish Civil War' and read in the biography on his page that he lost his Dutch citizenship because he had fought in this war. During WWII he joined the Dutch communist resistance and was a journalist for the resistance newspaper 'De Waarheid'. He was arrested together with his wife Aat Breur-Hibma who was sent to concentration camp Ravensbrück. Curious to know more about this for me hitherto unknown person I followed a link to an external source to learn that Krijn Breur was born into a socialist family and that he left for Spain in July 1937, aged 20. He got severely wounded two times and returned to the Netherlands in March 1939. In the next four years, in the midst of WWII and beside his resistance work, Krijn Breur met his wife Aat, got a son Wim and a daughter Dunya before he was executed on the Leusderheide near camp Amersfoort on the 5th of February 1943, aged 25. His wife and children survived the war.

Oorlogslevens.nl will not stop at the 300,000 stories of which Krijn Breur's is only one. The site is continuously being developed, work is continuing on making information about individuals easier to find and timelines are being extended by adding more sources. We will continue supporting the NOB in their important work.

The NOB also used Spinque Desk for their collections-portal (oorlogsbronnen.nl). You can read up on our previous collaboration with the NOB and their use of our technology in this client case.

Oorlogslevens.nl received a GLAMi award last night, one of the most important international prizes in the field of heritage and innovation! The prize was awarded during the annual MuseWeb Conference, the largest museum innovation and technology conference in the world with 800 participants from 40 countries. This community annually chooses the best innovations in cultural heritage through the GLAMi Awards. Oorlogslevens.nl has won in the category 'Exhibition or Collection Extension: Web', for digital applications that enrich collections outside the physical walls of cultural institutions. Congratulations!