Enabling city councilors to efficiently prepare for the political debate

City councillors are busy people. They combine their work for the council with regular jobs and therefore are focused on using their time as efficiently as possible. At the same time they want to enter the political arena as well prepared as possible.

'Searching and finding information is challenging, especially within a complex organisation such as a municipality. We want to serve the city optimally by making sure city councillors spend their time processing information in preparation for a debate not by searching for it.'

In a continuous effort to improve their service, Erwin and his colleagues decided to investigate and test how the retrieval of municipal information could be facilitated. They commissioned a prototype search engine that would allow city councillors to access multiple council sources via one portal. They wanted to develop this prototype in an agile fashion to be able to adjust the project along the way and selected Spinque to help them realise it. A team was formed consisting of information and UX specialists of the municipality and search designers of Spinque.

'The collaboration with Spinque was very pleasant: they really listened and thought along. The team collaborated very closely and produced a new version of the prototype every other week. ... At times though the process was annoying: the people of Spinque kept asking difficult questions we had never thought of... In all seriousness though: the collaboration was very stimulating and exceeded our expectations.'

After three months the design process was completed and the prototype was delivered. As required it allows city councillors to search in multiple council sources, but on top of that it supports them in satisfying certain specific information needs that were identified during the design process. For this the team created a knowledge graph with the concepts and entities in the municipal domain that are relevant for the city councillors.

'The domain model that was created is a really nice supplement. It actually is a prerequisite for Spinque's unique approach: uniformly applicable customization.'

The knowledge graph enables fine-grained information access. For example city councillors want to confront fellow councillors and alderpersons with statements they previously made. These statements are contained in minutes of meetings and can be searched and found as such. This is time-consuming however. Spinque extracted the statements from the minutes and added them as separate entities to the knowledge graph of the municipality. City councillors can now directly search for statements about particular topics and uttered by particular persons from specific parties. This way relevant statements can be found easier and quicker.

After the prototype phase the team deployed the search engine into production under the name U-reka. During this process information specialists of the municipality were trained as search designers. In the future they will adjust U-reka themselves and possibly design search solutions for other information needs within the municipality.

'In time this project might serve as a best practice for the rest of our organization, since all across the municipality we run into problems that can be solved with this technology.'

Spinque puts Erwin and his team in charge of their search and enables city councillors to find relevant information easily and quickly.

Utrecht is the fourth-largest city of the Netherlands with approximately 350.000 inhabitants. Due to its central position within the country it is an important economic, cultural and educational centre. The city council of Utrecht has 45 members. They represent the diverse people of the city and oversee the implementation of policy by the College of Mayor and Alderpersons. 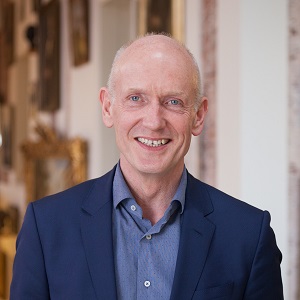 Erwin Raemakers is information and process manager at the Municipal Clerk's Office (MCO). The MCO advises and supports the city council and its members in the performance of their duties. Erwin directs strategic and innovative projects aimed at facilitating the work of city councillors.

Try U-reka yourself on ureka.utrecht.nl or visit raadzaam.nl if you want to know more about this search application for city councilors and its possible application in your municipality.

The team collaborated very closely and produced a new version of the prototype every other week.

During the design process we created a knowledge graph of the municipal domain. Central in this domain are the different types of 'instruments' available to city councillors to perform their duties: memos, questions, motions, letters, amendments and proposals. Another important concept are the activities in which these instruments are produced and used, for example meetings in which proposals are discussed and voted on.

The municipal information systems already contained several types of instruments and activities. During observation studies with users we learned that users often need to find proposals. This instrument was not explicitly defined in the information system and therefore difficult to find. The users also indicated that they wanted to know who-said-what in municipal meetings and what commitments were made by alderpersons. To enable search on these types of entities we extracted them from the text documents and explicitly modeled them in the knowledge graph. 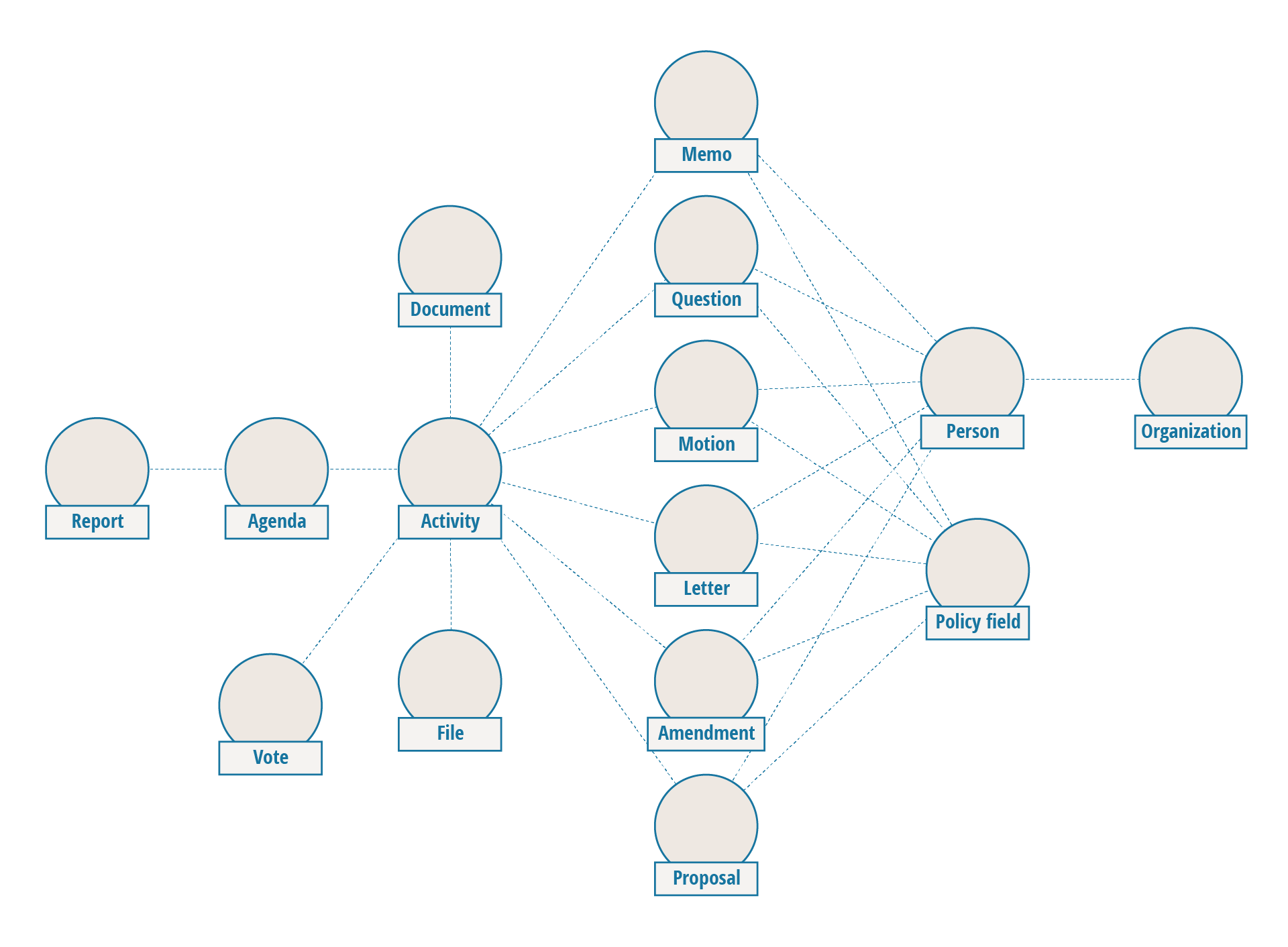 We implemented three search entry points to effectively support the different types of information needs that were identified during the design process:

You can search for yourself at ureka.utrecht.nl. 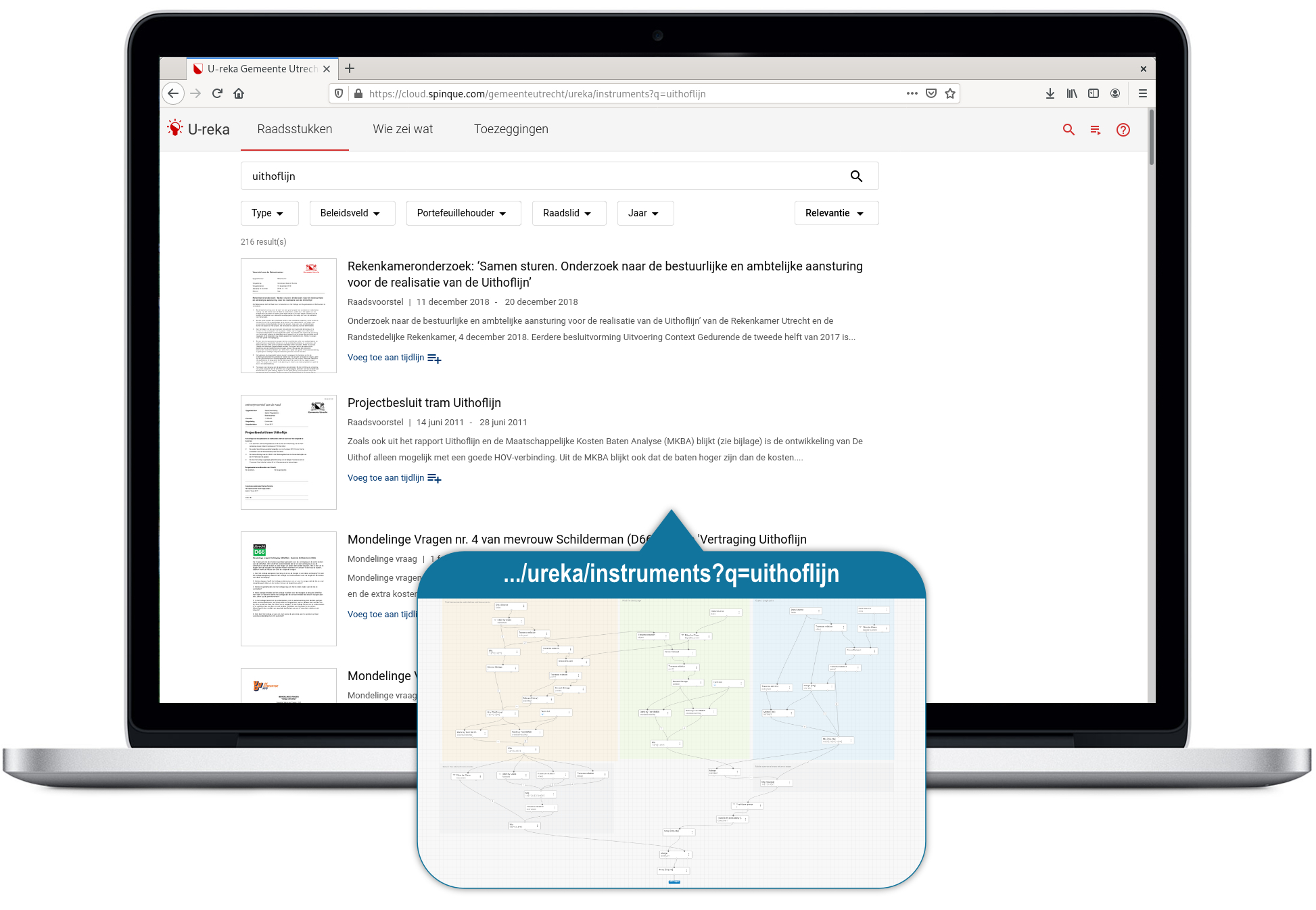 In Spinque Desk we implemented strategies for all three search entry points. The strategy to find a relevant instrument is most notable. Instruments are related to multiple text documents. For example a proposal will hold a specific proposal document. Of course the search strategy uses the full text of these documents to find instruments. Activities in which instruments are discussed may include additional documents. For example an elaboration of the proposal or the results of a related investigation. To improve findability, the search strategy also considers these related documents to find instruments. 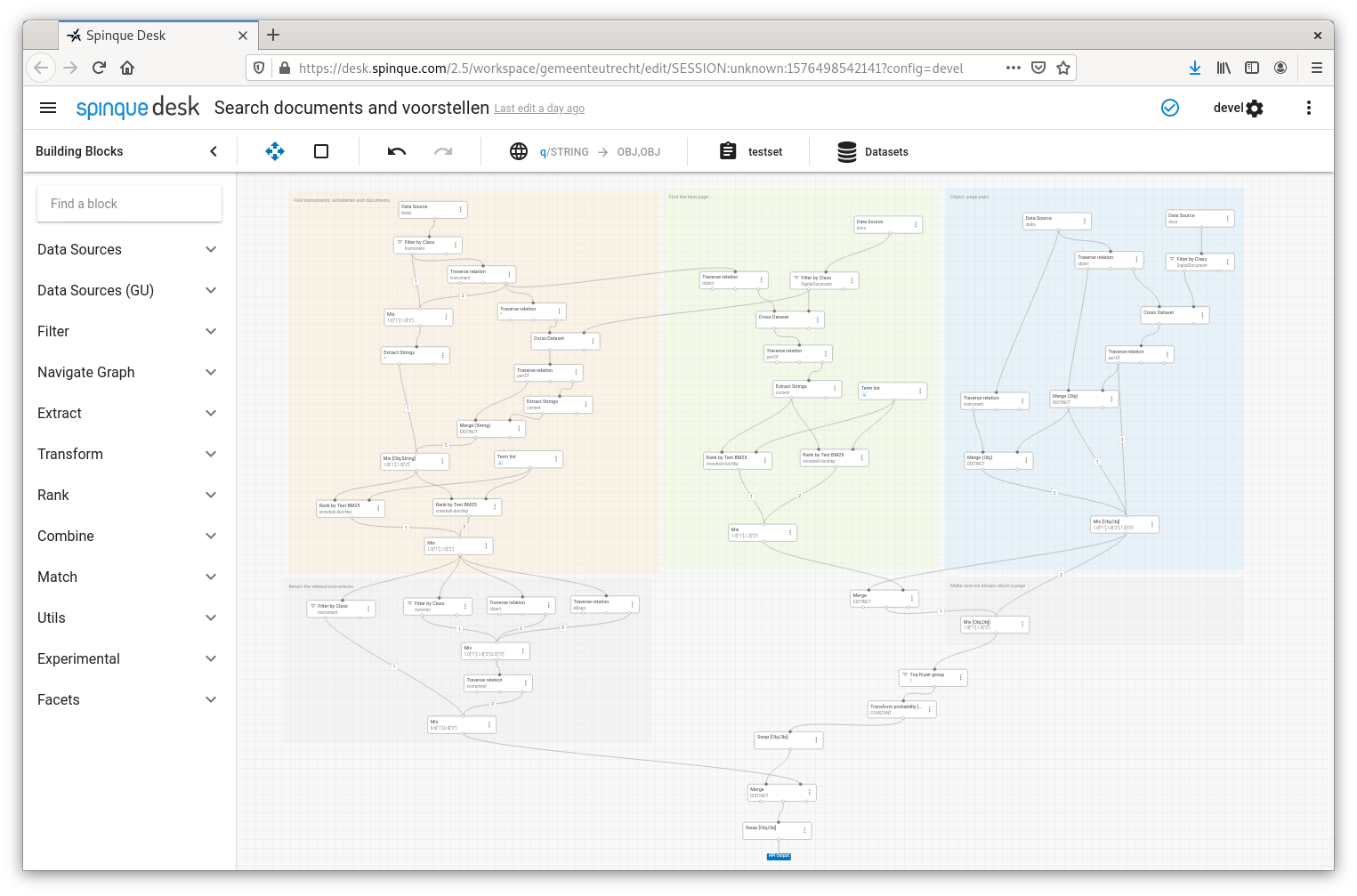 What we can do for you

In this project a search application tailored to the specific needs of city councillors was developed in close collaboration with information and UX specialists from the municipality. In a series of sprints various information needs were identified and supported. During this process Spinque Desk was used to design various evolving search strategies.

What information needs do your users have and how might a tailored search application help them? Let us know, we are happy to think along!

We offer the search application to other municipalities under the name Raadzaam. Visit raadzaam.nl if you are curious about the possibilities for your municipality.

Unified access to the knowledge on Vincent van Gogh.

Integrating Wikidata into an audiovisual archive.